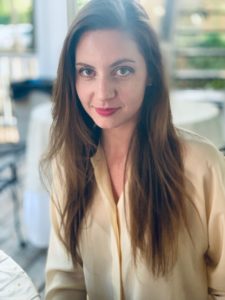 When Olivia was a freshman in college, a college professor asked her how she could believe in God when there was so much evil in the world.

She didn’t have an answer.

She had known Jesus as Lord since she was a young child and had never questioned his existence. The sudden exposure of her blind spots goaded her to action and she spent many nights in the library, studying the Bible, and writing out her thinking as she willingly put her faith on the line and sought to understand what was true about God.

As she studied and sought the Lord, she began to realize that the God she had known for so many years was much bigger, more captivating, and more loving than she had ever realized. Her professor’s question ignited a passion for knowing Jesus that soon spawned a second: helping other people know Him.

After graduating from college and completing a Fulbright Fellowship, she founded Looking Upward in January 2019 to help people grow spiritually by applying Biblical truth to their everyday lives.

Olivia graduated Phi Beta Kappa from the University of Mississippi (UM) with an English degree. She received three minors: music (piano performance emphasis), chemistry, and Classics (Ancient Greek). Her Sally McDonnell Barksdale Honors College thesis looked at atheism and the question of meaning in life through the lens of several Ian McEwan novels. Throughout her undergraduate career, Olivia received awards and scholarships for academic merit, piano performance, and writing. She was a 2013 National Merit Finalist.

After graduating from college, Olivia received a highly competitive Fulbright English Teaching Assistantship in Greece. During her year as a Fulbright Fellow, She worked at the Hellenic American Educational Foundation in Athens as an English teacher, forensics coach, and debate judge. She joined an International Christian Fellowship in downtown Athens, where she served on the worship team. A highlight of her year was traveling to All Saints’ Church in Wittenberg, Germany, on the 500th anniversary week of Martin Luther’s nailing the 95 Theses to its doors.

Olivia has a particular fondness for Christian apologetics. She was awarded the Legatus Christi Award from UM’s Ratio Christi chapter, an on-campus apologetics organization where she served as president. She has a certificate in apologetics from the Ravi Zacharias International Ministries (RZIM) Academy, attended the RZIM Summer Institute in 2016, and was selected by application to take part in the Emerging Apologists Program at RZIM in December 2018.

As a student of theology, she reads Biblical Greek and relies heavily on the writings of A. W. Tozer. A strong believer that the primary purpose of theology is to get to know God and share Him with others, she led a small group for college girls as an upperclassman. A short list of her favorite readings and resources is here.

An ardent enthusiastic of the arts, Olivia is a semi-professional classical pianist and a portrait artist. She and maintains a small piano studio and occasionally performs. Her portraits have been exhibited in Mississippi and Attica, Greece.

Originally from Central Florida, Olivia lives in Mississippi and works as a freelance content strategist and writer for a variety of companies and individuals both secular and Christian based across the United States.

Get the Looking Upward Letter

Subscribe Now
We use cookies to ensure that we give you the best experience on our website. If you continue to use this site, we will assume that you are okay with this.Accept cookiesPrivacy policy